Just a few days after the Bellevue Resort 5i50 in beautiful Bohol, I was traveling to Phuket. With the first edition of the Foremost Ironman 70.3 Thailand coming up by the end of the month, I wanted to spend some time training with my coach Jürgen Zäck and the Z-coaching squad in order to prepare well and get familiar once again with the roads and routes.

Since I’ve started training with Jürgen in 2012, I used to travel to Phuket about 2 times a year for training camp, but this year I trained with Jürgen in Germany and had not been to Phuket until then. It was really nice to see so many friends again, especially my buddies Oat and Ray, and to train with so many good athletes the weeks leading up to the race. 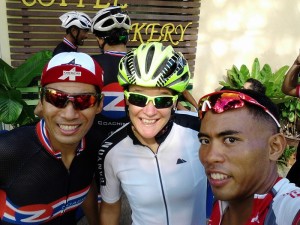 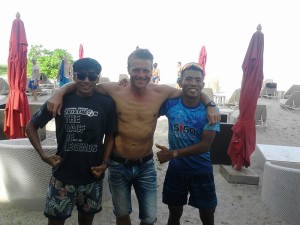 Just before the race weekend I moved to Outrigger Resort and met up again with my ALASKA team mates and friends, including the 70.3 World Champion Tim Reed, one of my idols!

I was busy with the usual pre-race activities including registration, carbo-party and race briefing but also watching Ironkids, that together with the main race has returned to Phuket and took place on Saturday at the stunning Thanyapura facilities.

The weather was mixed with occasional rain and not too hot. As usual, I prayed for sun, but was not totally heard. It had rained overnight and on race morning it was a still cloudy but nevertheless, I felt good and ready to roll.

I started in the Asian Elite category, which was packed with a lot of athletes from all over Asia, most of them I didn’t know, but also included two well known athletes, Thailand’s No. 1 triathlete and my good friend Ray, and the 2015 SEA Games Gold Medalist, Nikko Huelgas!

We Asian Elites started together with the Pro men in the first wave. The swim was a one lap loop, but because I couldn’t keep up with the pack in the beginning, I swam alone most of the course, until some of the female Pro caught up to me and I could draft someone. 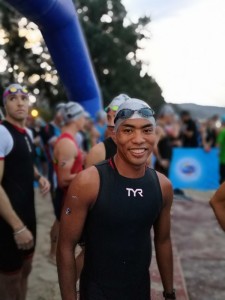 Out off the water I was quick in T1 which was right on the beach and then headed out on my bike. I knew that at least Nikko and Ray were in front of me and that I had to try to close the gap, pushing hard to do so. The bike course was mostly flat with some rolling hills. It was amazing to bike on the highway that was closed for traffic up to Sarasin Bridge. It is one of my favorite routes in Phuket. We had to loop once around the Sarasin area and then head back to T2. 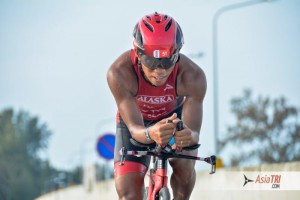 Back in T2 I just saw Nikko heading out on the run and knew that I had reduced the gap well on the bike, but I had no idea about Ray’s exact whereabouts. I suspected he was far ahead and I tried to hurry up in transition making my way out on the run.

I started running and as most of the times off the bike my legs felt a bit heavy. Here I really missed the Coke, what normally brings me back in the game, but unfortunately, this time, I had to make it without it and felt I could not find into my rhythm on the run. I wanted to accelerate but couldn’t really speed up. I caught Nikko around km 10 and then saw Ray at some turnaround. I calculated he had 2 minutes or more and he looked comfortable. Even with a gel I could not fight my laspag feeling. I tried to made the best out of it and ran the best I could and realized that this time it would not be possible to catch up with Ray.

When I crossed the finish line I knew I had given the best I could on that day and was happy with my 2nd place! Congrats to my buddy Ray and Nikko who ended up in 3rd! 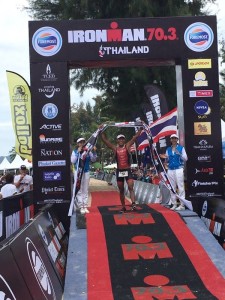 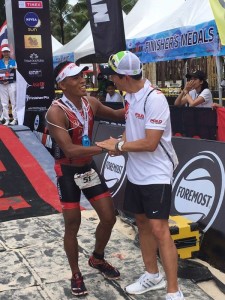 It was really a tough day and I think the alone time on the bike where I really tried to push hard made me suffer a little on the run, and it was not even a very sunny day 😉 But, you race, you learn… and I took many things to learn from this race! 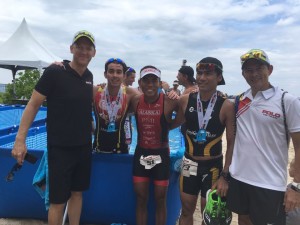 The rest of the day was filled with awarding and mingling with friends and fellow athletes, as well as celebrating dinner with Sir Fred and my ALASKA team & family which was a really nice conclusion of the day!

I want to give a shout out to Sunrise Events! The race was just awesome!!! It was a first time event and even though the race was perfectly organized and executed.

Thanks to my many Thai friends and Jürgen and the Z-coaching squad and BIG THANK YOU to all my sponsors ALASKA, PMI, Brooks, TYR, Gu, Prudential Guarantee and Czar Manglicmot Family for their support and especially to my ALASKA Family and Sunrise Events for making it possible to race the Foremost Ironman 70.3 Thailand! I’m already looking forward to being back in Phuket next year!